With the Barnes Maze Viewer Plug-In you can set up a high throughput system that does all calculations and statistics of Barnes Maze relevant parameters for you. Even for inter-group statistics you don’t need another software. An example of how Viewer plug-ins present result pool analyses is shown on the Multi Experiment Analysis

The following description provides an overview how the Barnes Maze Plug-In can improve your productivity. 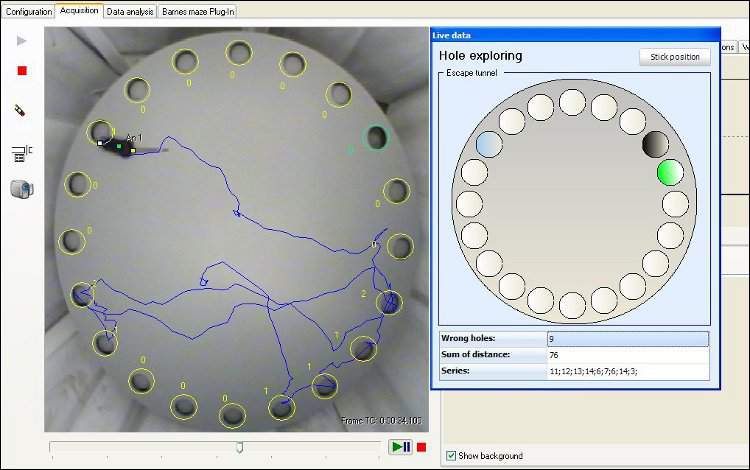 The screenshot above shows an acquisition in progress. On the left you can see that each hole has its own counter. In this example the escape hole is surrounded by a light blue zone (at about 2:30 pm position).
In the ‘Live data’ window on the right, some measures for parameters are displayed in real time.

Below the sketch of the setup there are three lines of values.
Wrong holes counts up the number of visited holes before the escape hole is found. The distance between a ‘false’ hole and the escape hole is measured in number of holes between those two holes. The Sum of distance is the total sum of holes between the escape hole and all visited holes. The Series is a string of semicola separated values. Each value is the ID of one hole. In this configuration hole No. 1 is at the 12 O’clock position and all others are then named counter clockwise. Hole Number 14 was visited twice, as you can read from the Series. The counter number near the zone indicates ‘2’ as well.

Configuration
In addition to the standard result parameters of the Viewer tracking software, you can define Barnes Maze specific parameters in the plug-in configuration.

Number of holes
The current version of our Barnes Maze Plug-In supports 20 holes and 40 holes disks, as these are the most common formats. If you use or plan to use a differnet number of holes, we will compile an adequate software version for you.
The disk diameter is also absolutely free to choose. It doesn’t influence the plug-in’s analysis routines.

Escape hole position
The escape hole is the target hole, where the animal can hide or where a reward can be placed. The parameters escape latency and distance directly depend on this hole’s position. In the configuration the position is simply defined by a mouse click into the hole. Thus it is easier to change the escape hole in the software than in the real setup.

Reinforcement
You can set an acustic signal on experiment start. This reinforcememt trains the animal not to wait in its release position at beginning. Escape latencies become better comparable this way.

Result table
Each experiment in a result pool is saved with the following values and parameters:

What do you need for a Barnes Maze setup?

We can provide you a turnkey Barnes Maze setup with all required components.

If you are planning a maze with a hole number nobody yet offers, we can provide it and adapt the software to it. Get a quotation.