T Maze Plug-In computes typical T Maze test parameters from Viewer track data. It is especially designed to promote high troughput and fast appreciation of the results. All tables and charts the software generates (see below on this page) can be exported as a bundle of Excel and image files with only one mouse button click. Its built in statistics provide an immediate understanding of diffrences between animals and differences in group performance – including t-test (p-value).

The T Maze test is a well elaborated spatial memory task that can indicate cognitive impairment in rats and mice. The test animal is released at the bottom of the T to offer it the choice between left and right maze arm exploration. In the most popular protocol for this test a first trial with one arm blocked is rapidly followed by a second trial with both arms accessible. If short term and working memory work well, it is assumed that rodents have a strong tendency to explore the “novel” arm in the second trial. Deviation from this expected spontaneous alternation behavior in the second trial and other performance characteristics are described by the parameters in the result and statistics tables shown below.

User defined omit criteria for inappropriate animal behavior can be used to take outliers or malperformers out of the result pool automatically. For example, if an animal doesn’t explore at all and stays in the start arm.

All charts compare group results. By the tabs at the bottom of the page you can switch between trial one and trial two. The outer left charts depict group results for each T Maze arm. 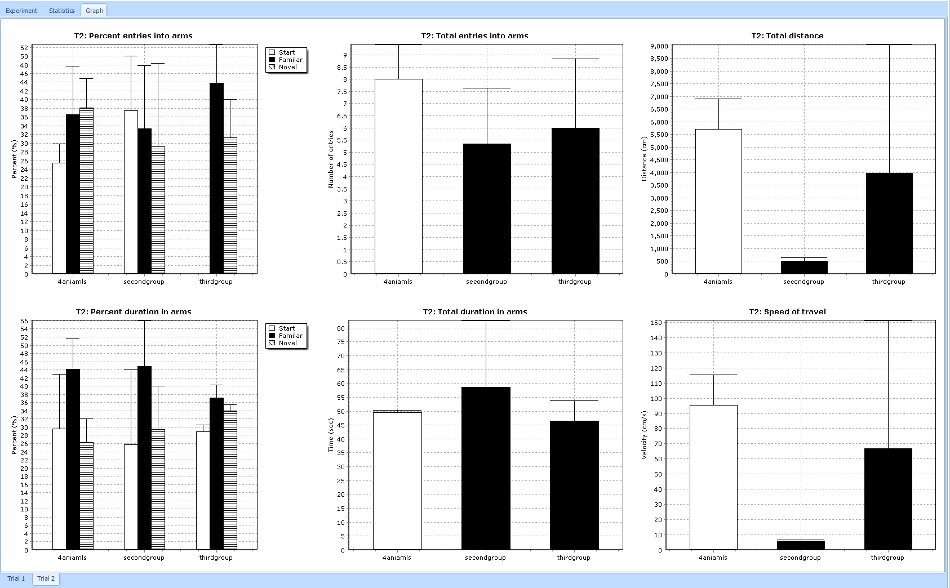 On the Statistics page you can find the tables the charts base on. They present averages and standard deviations for each parameter over the group result pools. T-test is also automatically computed and the resulting p-values are issued for each group to group relation.

Viewer can be configured to use more than one point on the animal as reference for a zone visits (nose, body, tail). Thus the animal can not score hundreds of visits by very small movements at the entrance of an arm and you always get comprehensible maze arm visits.

What do you need for a T Maze setup?
We can provide you a turnkey setup with all required components. Get a quotation.