Working with the software is a four step procedure. The general process is described in the following individual steps: 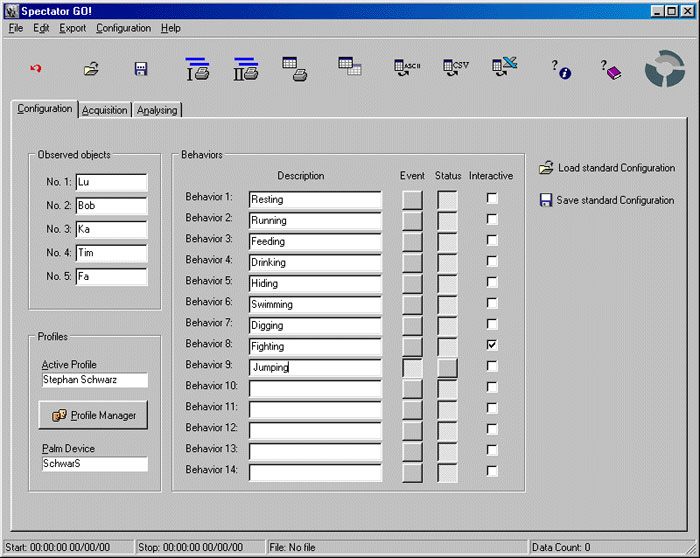 Configuration of the software

This is the configuration page of the desktop software. This page enables you to configure the input template that you will want to use on your PDA for data generation.

Under “Observed subjects” you can fill in the names of up to five subjects whose behavior you want to monitor. In the “Behavior” field up to 14 different behaviors can be inserted (56 in the Professional version). By clicking the “Event” or “Status” button for each behavior, you can determine each behavior as either a short (event) or a long lasting behavior (state). Check “Interactive” to designate those behaviors that can be observed between two subjects (e.g. fighting). During later data generation these interactive behaviors can be designated for both the active individual and the passive individual as well. 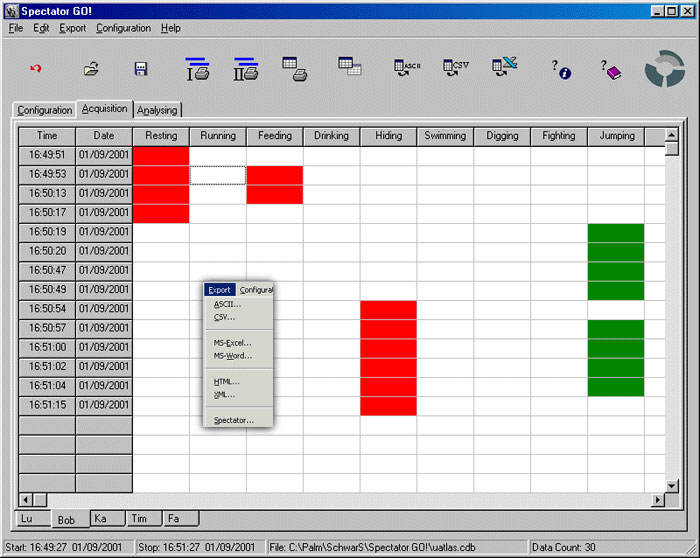 On the acquisition page in the main window a table is shown representing data generated with the PDA. A table with the protocolled behaviors is generated for every individually observed object. Below the table you can alternate between the different objects under observation by pressing the different register cards containing the subject’s names.

The first column of the table denotes the time a behavior occurred (24 hour mode), the second column represents the date, and the following 14 columns indicate the type of behavior that has occurred. You can export this data to various file formats that can be found in the export menu. 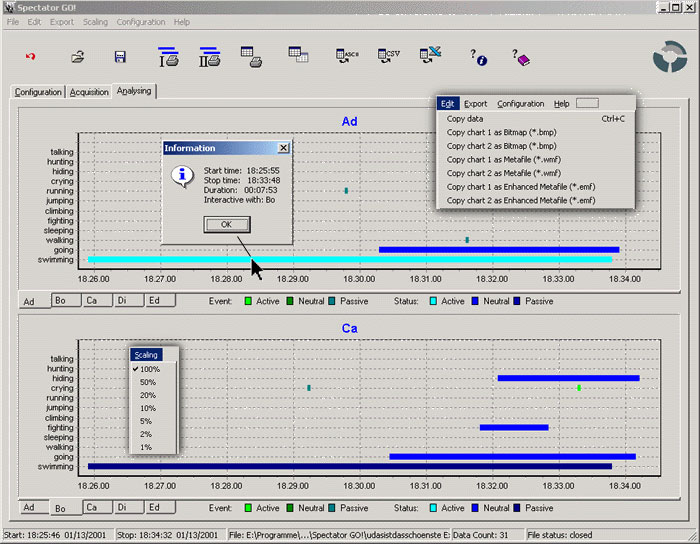 Experimental data is represented graphically on the analyzing page. The blue bars designate the subject’s state and the single black bars indicate the events. The colors blue and green denote the difference between a state and an event with blue representing the state and green representing the event. Different variations of blue and green indicate the different active or passive parts in an interactive behavior. Light blue indicates the active partner in an interactive behavioral state, dark blue represents the passive part in an interactive behavioral state. Standard blue indicates a non interactive behavioral state. For events, the color green is used following the same scheme as blue for states. Of course you can change these colors if you like. Below each graph the individual experimental subjects are represented on the register cards. Select a register card to switch between subjects as showed in the preceding table. You can easily compare two individual objects in the analyzing window due to the horizontal split screen. Also you can copy each chart in various file formats and you can scale the window to see more details.