Traditional behavioral phenotyping often requires frequent handling of animals. This might result in increased levels of unspecific stress, in addition to unspecific and uncontrollable stressors during the experimental paradigm, which is very likely to affect the behavioral performance as well as it might increase interpretational ambiguity and lower the validity of findings. We therefore developed a fully automated, modular, and home cage-based environment to explore the dynamics of the behavioral performance in situations of deliberate choice on drastically extended time-scales, which enable measures that match the time-scale of long-term physiological and behavioral processes.

The HomeCage PLUS consists of a home compartment (including food and water dispensers, optional with control 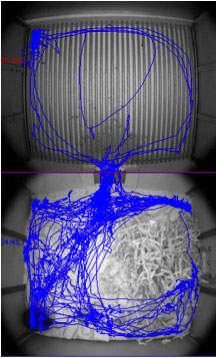 able access) and a modular test compartment, which can be attached to the home cage. Both compartments are separated by an automatically (script-controlled) operated door. To investigate short- and long-term memory, a separation of compartments is crucial and exploits the innate novelty-seeking behavior of mice during predefined periods based on deliberate choice. Mouse behavior is monitored by two cameras using the Viewer tracking software. A customizable software script, which meets the requirements of a specific behavioral paradigm, controls the actions of the hardware in dependency of time or shown behaviors. This includes opening and closing of doors, or (optionally) the operation of any other hardware.

For example, in an attached shock compartment for contextual or cued fear conditioning (see figure XX), the electric shock is administered at specific times and/or depending on the ego- and/or allo-centric position of the mouse in an operant fashion. The control of hardware might be based on instrumental responses such as entering particular zones in the shock compartment. Or following automatically generated cues, like auditory cues. The behavior is constantly monitored for several days throughout the light and dark phases, and, in addition to the automatically extracted measurements, the video is stored digitally for quality control.

High temporal and spatial resolution throughout the entire experiment in combination with the outstandingly accurate 3 point-tracking by Biobserve’s Viewer© tracking software, allows for rich data sets and novel, robust measures. Additionally, automation of experiments on extended time-scales enables significantly prolonged periods of habituation, which, in combination with the lack of human interference, is likely to minimize levels of unspecific stress. Especially in the context of individual differences in the susceptibility to stress, levels of automation and standardization (like they are facilitated by this system) might also increase reliability and replicability of scientific findings. The HomeCage PLUS system facilitates naturalistic-like behavior of mice and therefore fosters valid interpretations of observations of the behavioral performance which is characterized by (deliberate) trade-offs between avoidance and novelty-seeking (curiosity) during conflict situations. Behavior quantification on long time scales based on deliberate choice is an outstanding feature of the HomeCage PLUS system.

Novel compartments can be equipped with versatile add-on components. The system is designed to integrate any commercially available hardware. A summary of the most prominent features:

We are just beginning to explore the versatile possibilities of this experimental approach with the HOMECAGE PLUS, while first results (see Hager et al., 2014) point to the following major benefits: Exploitation of naturalistic-like conditions to assess fear memory for days after e.g. a single shock exposure with minimal human intervention enables the investigation of various aspects of fear learning: from training to long-term memory, extinction and latent inhibition.Ultimately, the extension of behavioral observations by concomitant autonomic and electrophysiological measures will further increase the validity of interpretations and will provide novel insights on systematic and holistic levels. The flexible design allows to integrate any commercial or customized hardware (e.g., equipment for telemetry-based measurements).

For the automated experiment control we developed a script Plug-In for our Viewer tracking software. It enables theexperimenter to design complex and flexible experiment procedures by combining temporal, event-dependent, and data-dependent conditions. Fulfilled conditions can trigger a hardware device like a shocker, or initiate a jump to another position in the script. Determined by the scientist’s script, the cage can respond to the animal’s behavior in a complex and suitable way.The screen shot shows the first part of a script routine that was used in a series of fear conditioning experiments. After adefinable time (#0) the door is opened with a TTL pulse (#1). The door stays open till the animal enters the shock compartment voluntarily (#2). When the door is closed (#3) a validation is done to prove that the animal is still in the shock compartment (#4). After another definable time (#5), the shock is applied (#6). The Plug-In offers you a superior variability and flexibility in experimental procedures. Using the intuitive user interface you can build scripts that control the peripheral hardware. You can generate and play sound files and thus perform conditioning experiments without the need of expensive additional hardware or software.